From myth to global symbol of trust

With its upright posture and demanding presence, the UPM Griffin doesn’t go unnoticed. But how did this ancient creature come to represent UPM and what’s the connection with the forest industry?

As of today, the Griffin logo is the oldest Finnish business symbol still in use. The story starts at the end of the 19th century in Finland, when a considerable amount of the country’s paper exports went to Russia.

“The company hosted a competition for artists to create a new logo,” says Eero Niinikoski, former Director of Industrial Heritage and Cultural Affairs at UPM and Executive Director of the UPM-Kymmene Cultural Foundation. “Hugo Simberg, a Finnish painter and symbolist, won the competition with his griffin illustration.”

Kymmene Aktiebolag purchased the drawing in 1899, and it was officially accepted as the company logo in 1901.The question of why Simberg chose the griffin to represent the company remain a mystery that he took to the grave.

However, that does not stop the theories. Around the same time, a successful Latvian paper mill was using a watermark depicting a griffin. According to one theory, this might have inspired Simberg – as Niinikoski points out in his book on the griffin, ‘The Griffin - From Mythical Beast to Corporate Logo.’ But it is most likely that Simberg was captivated with the mythological aspect of the griffin.

Hugo Simberg’s original drawing has formed into the current modern version of the griffin designed by Esa Ojala.
Photo – UPM

Myths evolve over time and can take many different forms. Depicted as half-lion, half-eagle, the griffin is the oldest mythical creature found on European coats of arms, dating back as far as the Middle Ages.

In Finnish, the word griffin is translated as ‘aarnikotka’. According to philologists, the word ‘aarni’ refers to a large tree or person, but there’s also a connection to the word ‘haltija’, which means a protector or guardian of treasures.

“The griffin, as we know it, is over 5,000 years old. Ancient Egyptian and Babylonian mythology knew of the griffin and, later on, it is most likely to have arrived in Europe via Greece,” Niinikoski says.

Folklorists have even drawn a connection between the griffin and Louhi, who takes the form of a giant eagle in Kalevala, the Finnish national epic. Knowing that Simberg was a student of Akseli Gallen-Kallela, a famous Finnish painter of Kalevala themed masterpieces, further supports the theory.

“First and foremost, the griffin was the guardian of gold. According to the ancient Greeks, the griffins guarded gold in the Central Asian Altai mountains,” Niinikoski explains. “And this is one explanation as to why Hugo Simberg most likely chose the griffin – what better symbol for a forest company than the mythical creature who, in this case, protects the green forest gold.” 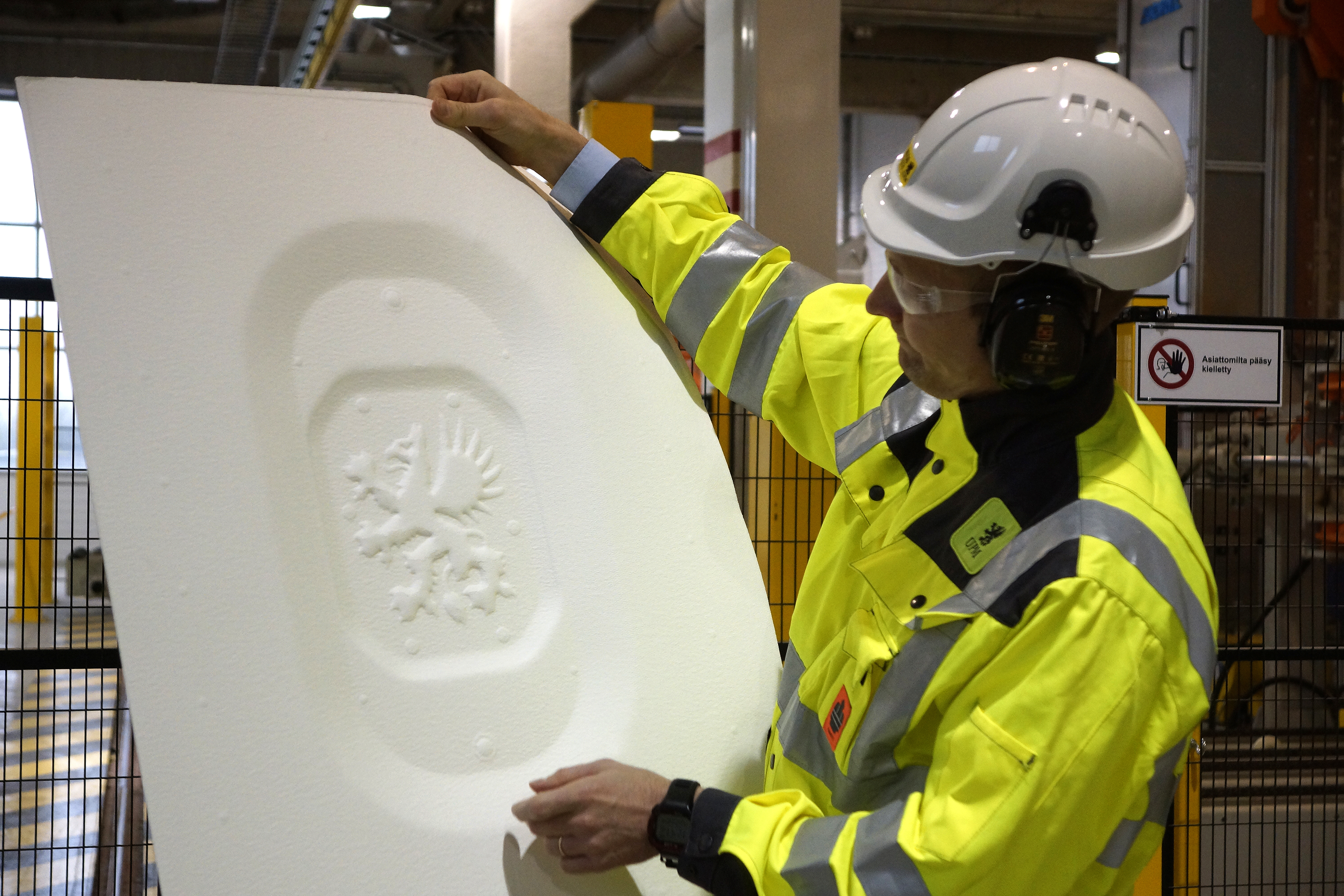 The griffin logo is embossed on the wrappers of pulp bales produced at the Kymi mill.
Photo – UPM

It could rightfully be said that the Griffin has become an integral part of the modern UPM narrative.

“The griffin is a mystical protector and as a logo, it symbolises continuity, trust and strength,” describes Pirkko Harrela, Executive Vice President, Stakeholder Relations at UPM. “It protects the sustainable resources of our forests.”

Harrela feels that although the logo was created over 120 years ago, it’s still very relevant and international.

“The logo speaks to people around the world. For instance, in China, where mythical creatures still appear in everyday conversations, we are often asked about the story behind our logo,” Harrela says. “The Griffin tells a great story, of which we can be proud.”

The UPM Griffin has been used everywhere – from ceramics to furniture, as well as the company architecture. Even today, it can be found embossed in the pulp bales produced at the Kymi pulp mill in Kuusankoski, southern Finland, the same location where the logo was originally taken into use.

The appearance of the logo underwent a few stylistic changes over the course of the 20th century. After a merger in 1996, the latest version – including the abbreviation ‘UPM’ – was registered as the official company logo.

Since UPM has shifted its focus to renewable materials, the Griffin is also used side by side with the company slogan: ‘Future beyond fossils’.

“The company’s logo not only communicates our history but also where we’re heading. UPM has deep-rooted values and, simultaneously, we’re a dynamic business that’s responsible in its actions and targets,” Harrela explains.

“UPM’s Griffin symbolises leadership, and that is what we need today,” Niinikoski concludes.