An evergreen future – The role of forests as carbon sinks

When it comes to combating climate change, the significance of forests is widely known. Understanding the mechanics of how forests grow and thrive helps us assess their value as so-called ‘carbon sinks’ that act as natural reservoirs to trap carbon.

Carbon dioxide is the most significant greenhouse gas in the world. Global efforts to mitigate climate change focus on lowering carbon dioxide emissions, particularly those coming from the use of fossil fuels.

Meanwhile, another solution to tackle the same problem is to find ways to remove the existing carbon dioxide from the atmosphere and hold it in solid or liquid form, the so-called carbon sequestration process. This involves either liquifying the gas and injecting the liquid over 800 meters below the ground or mineralising it by exposing it to silicate compounds.

However, the most efficient method of carbon capture remains nature’s own tried and tested technique: photosynthesis.

Photosynthesis is the mechanism a plant uses to harvest energy from the sun. On a molecular level, the process begins in the plant’s proteins that contain chlorophyll, the pigment that gives plants their green colour. For trees, this means carbon dioxide is trapped via the plant’s leaves or needles.

The proteins containing chlorophyll absorb sunlight and use its energy, carbon dioxide (CO2) and water (H2O) to make glucose (C6H12O6) and release oxygen (O2) as a by-product. The tree will further process glucose into various other compounds such as starch, using about half of it to sustain itself and the other half for growth. The tree sheds part of this growth in the form of needles, branches or bark seasonally. The rest remains in the tree, for instance in the stem, branches and roots.

This is how the carbon from carbon dioxide stays in a solid form until the tree or parts of it either burn or decompose, processes that release some or all of the carbon back into the atmosphere as a part of the Earth’s natural carbon cycle. 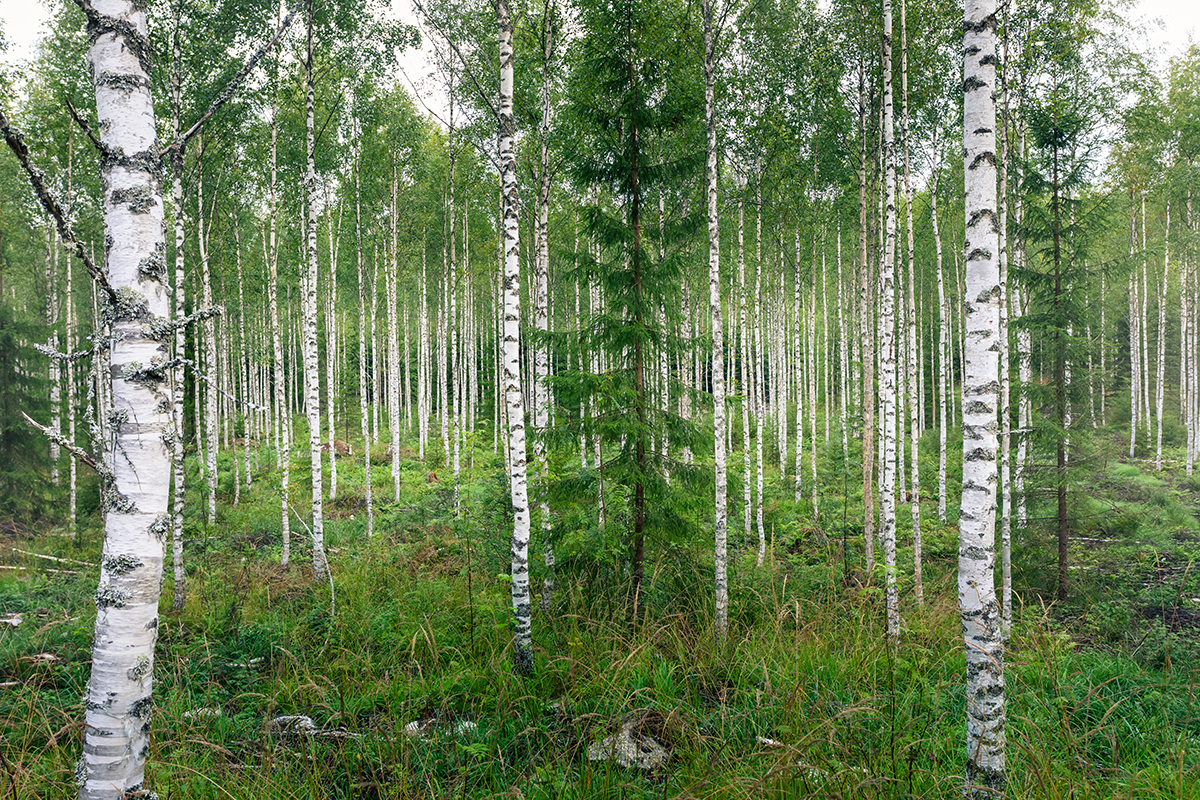 The role of managed forests

Knowing how trees bind carbon helps understand the different environmental impacts of forests to our planet, as they act as carbon sinks, accumulating and storing carbon over a period of time. That’s not all. Forests also prevent soil erosion; help protect water sources and are home to many different species of flora and fauna.

“The primary value of natural forests is how they protect biodiversity, which in turn protects the entire ecosystem. For that purpose, they are irreplaceable,” says Antti Asikainen, Executive Vice President - Research at LUKE, Natural Resources Institute Finland.

While they are rich in species, a mature natural forest, does not grow much and therefore there is a limit to how much new carbon they can bind effectively. This is where experts have been looking at the role of managed forests. Managed forests are forests run on sustainable principles that ensure more trees are planted than felled and that they are monitored for signs of disease and kept safe from fire.

Forestry companies contribute to this through the sustainable management of forests, taking into account Sustainable Forest Management (SFM) practices that mimic, as much as possible, natural patterns of disturbance and regeneration, ensuring an ever-renewable, healthy, and sustainable source of wood and other ecosystem services.

UPM has contributed to these efforts in many ways. One example is its tree nurseries – one in Finland and two in Uruguay, where UPM develops and produces healthy and productive seedlings for planting. An estimated 50 million seedlings are planted annually in UPM’s commercial forests and plantations worldwide.

“Both managed forests and natural forests have their role to play in combating climate change. In Uruguay, for example, UPM’s eucalyptus plantations are established on degraded grasslands. All the natural forests are protected in Uruguay,” explains Inka Musta, Senior Manager, Environment, UPM Wood Sourcing and Forestry.

In the case of managed forests, from a climate perspective, the important aspect to consider is what happens to the wood after it is harvested.

“UPM, for instance, produces plywood and timber for buildings and furniture, which tend to have good longevity. Pulp, on the other hand, can be recycled. Wood fibres used to make paper, for instance, can be recycled as much as seven times, meaning they stay in circulation for years. Wood fibres can also be used to make products with an even longer life, such as composite materials or clothes,” explains Musta. This means that every product made out of wood is carbon storage in its own right – if only a small one.

Resource efficiency is also important, for example by finding uses for the side streams of wood processing in all its phases.

“We use wood chips for making pulp and lignin in products that can replace the fossil-based phenol for instance in resins for plywood,” says Musta. “Future innovations can increase the longevity of different wood-based solutions even more. Importantly, wood can be used to replace fossil fuel materials in many products.”