Humans of Pulp: Youth is no obstacle to leadership for UPM Kymi’s Ville Tapalinen Process engineer Ville Tapalinen might be the youngest professional at the UPM Kymi pulp mill, but that has not stopped him taking on responsibilities and opportunities to grow professionally. Find out more.

Ville Tapalinen reports to work at 7.30 am sharp, after a nine-kilometre bicycle ride from his home in Kouvola. Tapalinen works as a process engineer at the Kymi pulp mill, department of chemical recovery and oversees energy-producing steam turbines in the Kymi, Kaukas, Pietarsaari and even Fray Bentos pulp mills.

At the Kymi pulp mill, steam turbines generate power for the plant. Tapalinen helps all three UPM pulp mills in Finland to keep their turbines running as efficiently as possible. That includes keeping track of maintenance, spare parts and solving potential problems.

Opening his computer in an office room he shares with a colleague, Tapalinen starts going through reports from the previous evening and night. He wants to be prepared for a meeting at eight, where the daily running of the Kymi pulp mill, as well as safety and environmental issues, are discussed among a group of managers and engineers.

“A big part of my work is thinking ahead, preparing for possible outcomes and being creative,” Tapalinen says.

“Recently, we prepared for a two-week production stoppage for maintenance at the Kymi mill, so preparations took a lot of my time.”

Leadership begins at a young age

Tapalinen, who at 26, is the youngest professional at the Kymi pulp mill, commends UPM for letting even young professionals take on a significant role.

“It is rewarding to work in such an interesting and important sector. At UPM there are a lot of opportunities to grow professionally if you are willing to take responsibility,” he says.

Lunch hour awaits, and Tapalinen takes a five-minute walk from his office to the cafeteria, which is located at the middle of the huge mill lot area. He serves himself a hearty lunch and sits at a table with his colleagues. Tapalinen says that the sense of solidarity among people at the mill is strong, even when things get busy. During the production stoppage, Tapalinen is acting as a supervisor, a leadership role which he conducts in his easy-going, talkative way. Many people he is managing are twice his age.

“I have never heard any comments about my age here. It is more in my own head that I feel I have to prove myself somehow,” he says.

After lunch, Tapalinen takes a tour inside the turbine hall. The turbine, which weighs 222,029 Kg and is over six metres high, takes up most of the high-ceiling room. The noise is so deafening that wearing hearing protectors, among other safety equipment is obligatory. Tapalinen walks around the machine, conducting a general inspection and checking for any leakages. Even though most of his work is done in front of a computer, he likes to step into the turbine hall every once in a while. 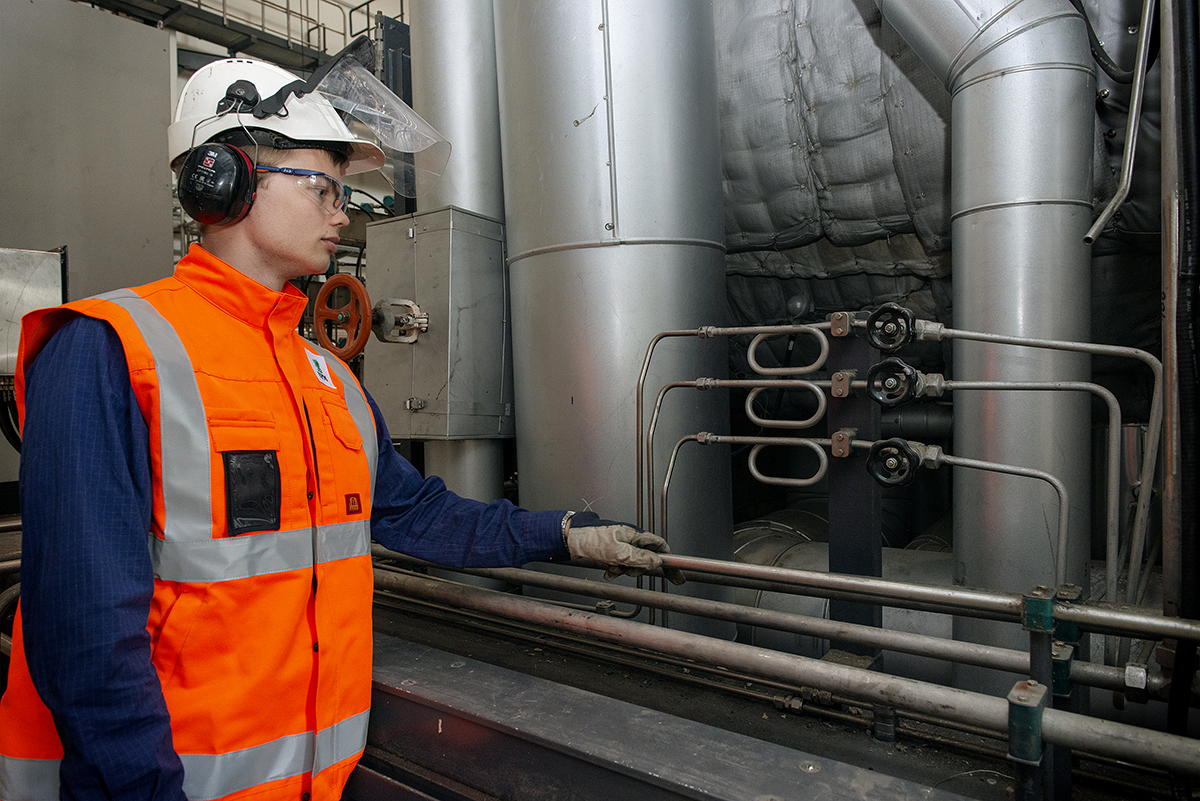 The third generation in forestry

Originally from Kemi, Lapland, Tapalinen reveals he is already the third generation of his family to work in the forestry industry.

“Both my father and my grandfather have worked in a pulp mill up in northern Finland. So maybe it was not a coincidence that I ended up in the same sector,” he says coyly. “But it wasn’t until my brother also began his engineering studies that I started to notice a pattern!

Tapalinen began his UPM career with a summer internship as a shift worker at the Kaukas pulp mill in Lappeenranta. He was at the time a student at the Lappeenranta University of Technology. He says he had always an interest in science but wanted to find something where he could combine theory and practical work.

“I found a perfect match in studying energy management and systems technology,” Tapalinen explains.
After spending four summers at the Kaukas mill, with two of them as a deputy shift supervisor, Tapalinen found permanent employment at the Kymi pulp mill.

No shortcut for hard work

It is close to four in the afternoon, but Tapalinen is continuing his day by checking reports from the UPM intranet and sending emails. He says he often gets so interested in solving a problem or searching for information that he loses track of time.

Tapalinen likes to visit Kemi to see his family every few months. In Lapland, he enjoys fishing and hunting and spending time outdoors. This also helps him unwind from any stress.

When discussing his future goals, he says his main objective is to gather as much information and know-how in his field as he can.

“I do have visions of how I would like to improve things in the future. Luckily here at UPM expressing your own opinions is encouraged,” Tapalinen says.