There are many unnecessary migratory barriers such as defunct dams in Finland, and by removing them, biodiversity can be restored. UPM has completed the restorations of two such projects, Sapsokoski and Arvajankoski rapids.

The restoration of Sapsokoski in Sotkamo was completed in August. The old mill and dam had already been removed in 2020, and now the rapids were restored to their natural state by returning stones that had been removed from the river. In addition, a total of thirty gravel beds were built at various locations along the rapids to serve as spawning habitats for migrating fish, especially for the endangered trout. The removal of the dam opened up a migratory route of nearly 40 kilometers.

The restoration of Arvajankoski in Jämsä was completed in October. The old pumping station and dam structures were removed and replaced by a submerged dam. In addition, the old fish ladder was renewed, and new spawning sites were added. The submerged dam enables the upstream passage of fish while also reducing water level fluctuation. 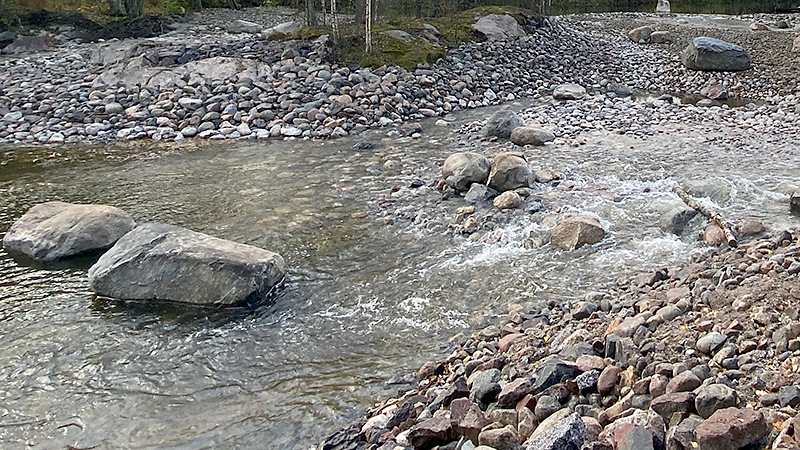 The 19-kilometer Arvaja rapids represent a significant spawning site for trout native to Lake Päijänne. “The project went according to plan, and the trout have already begun migrating from Lake Päijänne via the new fish ladder to the Arvaja rapids,” says Pekka Rantala, an environmental engineer at UPM Communication Papers. In total, the restoration of the rapids freed up a habit of more than 55 kilometres for migratory fish.

The restoration of Sapsokoski was carried out in cooperation with UPM Energy, Fortum, the Kainuu Fisheries Research Station and the Lapland Centre for Economic Development, Transport and the Environment. The restoration of Arvajankoski was carried out in cooperation with Keski-Suomen Vesi ja ympäristö ry and the Economic Development, Transport and the Environment Centre of northern Savonia. The project also received support from the Ministry of Agriculture and Forestry’s NOUSU programme, which aims to improve the living conditions of migratory fish and to restore the natural reproduction of migratory fish populations in Finnish rivers. The results of both restoration projects will be followed up.

UPM’s migratory fish programme aims to revive migratory fish stocks in locations offering the best conditions for their natural success. Within the framework of the programme, UPM has removed migration barriers and participated in several pilot and research projects. UPM Energy is continuously on the lookout for new target areas to be included in the program.