In summer 2019 UPM announced the investment decision to construct a 2.1 million tonne greenfield eucalyptus pulp mill – their second one in Uruguay. That’s mere 17 months ago, but boy, has the world changed ever since.

The investment announcement set things in motion on several fronts. The mill site began buzzling near the rural communities of Paso de los Toros and Centenario. The work kicked off in the port of Montevideo for a modern port terminal with a direct rail access. A sizable housing project to accommodate 5,000+ workers went in the high gear and is well underway. At the same, a new nursery being built near the town of Sarandi del Yì will take the raw material supply security to the next level.

And then there’s of course the global pandemic that affects every decision we make.

Gonzalo Giambruno, Director, Uruguay Development Project, says that to keep a project of this magnitude on track and in schedule they must have a diverse and committed professional team.

“There’s plenty happening all around Uruguay. A lot of moving parts. Over 16 active working sites are keeping us busy, but everything is proceeding according to plan.”

One of the clearest indicators of the ever-intensifying construction work is the amount of people working in different sites.

“The number of workers involved in the project is growing month by month. Today we have around 3,000 working at the mill site, in the housing and port of Montevideo. As the plans progress, every month we need 400-500 more workers. At the end of the year we’ll employ directly more than 6,000,” Giambruno explains.

At this stage of the project, most of the workers are locals. Even though the upcoming steps will involve more specialised foreign companies and experts, the Uruguayans will play a major role in building UPM’s second world-class mill in the country.

Giambruno – also a Uruguayan himself – says that they have prepared themselves well. This means both learning from their past achievements in Fray Bentos and training for the future ones in Paso de los Toros.

“We know what it takes to plan, build and run a modern pulp mill. At the same time, we have engaged in intense training and updating local competences of different disciplines. The training courses are channelled through Uruguay’s National Employment and Training Institute INEFOP.”

The chimney has been growing at the rate of 20 centimetres per hour around the clock to its maximum height of 127 metres.

The work has been at full swing now in Uruguay for months, but up until now most of the construction has been done ‘below the surface’. This has included preparing the soil and laying the foundations of the mill, housing and other buildings. The new pulp terminal in Montevideo has been dredged and backfilled to a deep-sea level.

“In recent months we have finally began to grow upwards. We have completed most of the concrete work. The civil construction work that includes, for example roads and other infrastructure, is proceeding as planned,” Gonzalo Giambruno says.

Perhaps the most noticeable sign of progress is the mill’s flue-gas stack soaring to the skies. The chimney has been growing at the rate of 20 centimetres per hour around the clock toits maximum height of 127 metres.

At the port the piers, tank and unloading areas as well as warehouses are taking shape.

The housing for the workers is an integral part of the whole project. According to Giambruno, the majority of the accommodation is ready and will be finished by the beginning of 2021.

“The housing must be completed before people start coming in masses. We need to generate capacity to house over 5,000 workers near the mill site.”

That’s a huge, temporary jump in population in the area. The communities near the mill site are relatively small; with 13,000 inhabitants here in Paso de los Toros, 1,000 in Centenario and Carlos Reyles and 40,000 in Durazno.

While the housing is being completed the next steps are to strengthen the external services so that the local communities will be able to host the project.

As part of the agreement between UPM and the government of Uruguay, the road and rail infrastructure improvements are also proceeding.

“The road and the railway from Montevideo go side by side most of the journey to Paso de los Toros. When traveling from the capital to central Uruguay, you will spot an impressive amount of construction sites,” Giambruno says. 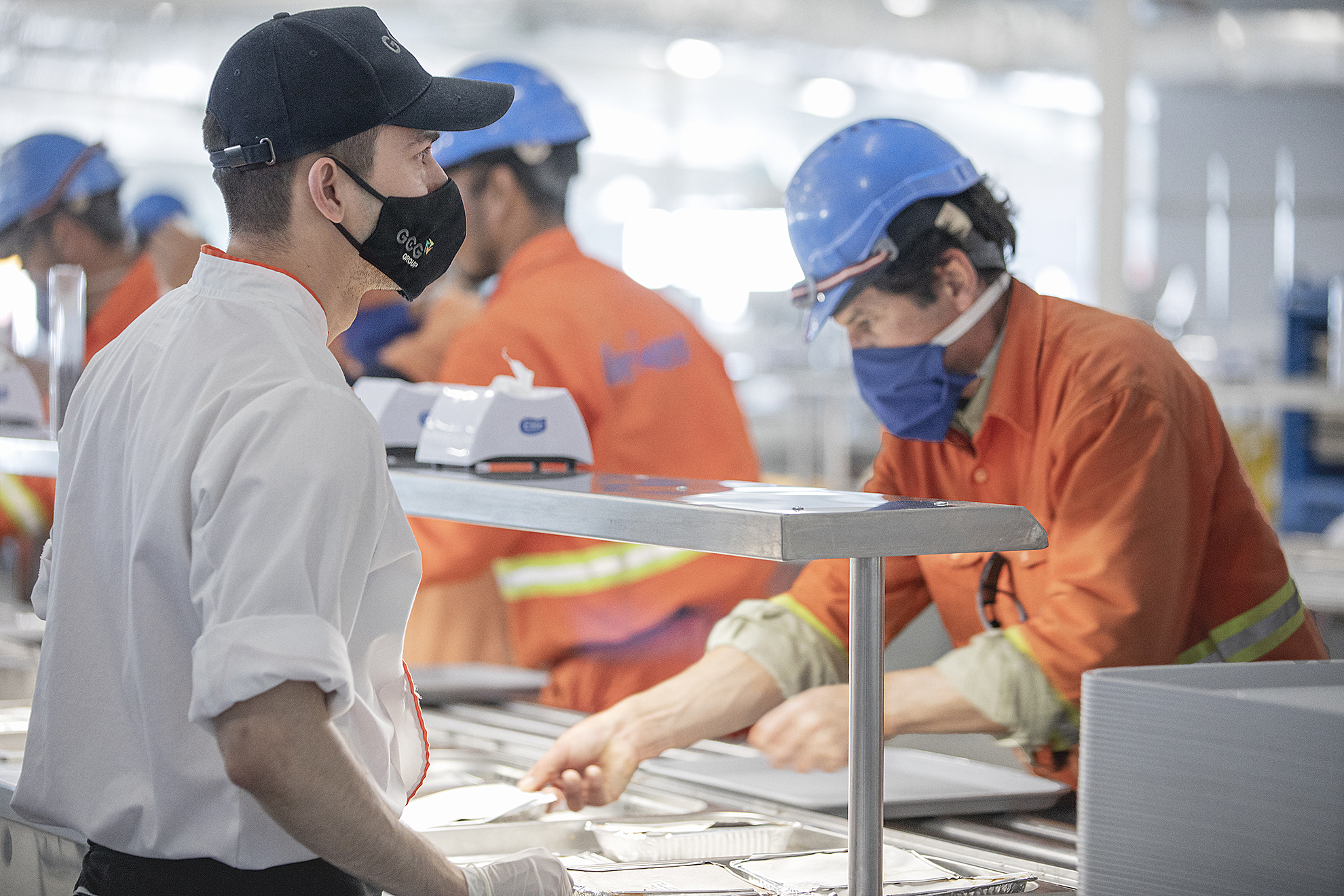 At this stage of the project most of the workers are locals and Uruguayans will keep playing a major role in building UPM’s second world class mill in their country.

Uruguay has been one of the best performers in Latin America – even in the world – coping with the Coronavirus. Compared to its neighbouring countries Uruguay has had only a fraction of active cases at any given time.

“That’s a big achievement, but with a pandemic like COVID-19 everything can change very quickly. We need to remain focused and vigilant,” Gonzalo Giambruno points out.

So far, Uruguay hasn’t imposed a mandatory lockdown of any sort. The country’s successful COVID strategy has been simple yet effective. The government requested people to keep their lives as normal as possible, but at the same time to be responsible in every action they take, big and small.

“We have actually taken the same approach in our project. The work has continued uninterrupted since everybody is going out of their way with extra precautions,” Giambruno says.

The first step was to change their way of thinking and working. This meant shifting from a centralised approach into a team-based and compartmentalised concept. You will always be working, living, commuting and eating within a same small group of people no matter which construction site you are assigned to. If there’s a positive Coronavirus case, only a limited number of people has been in contact with that person. They can be easily isolated, tested and followed up without infecting the whole site.

Most of the workers – especially at this stage of the project – are young and generally healthy. They may be completely symptomless and still carry the virus.

“In addition to random testing everyone gets tested when they start working in any of the construction sites. And thanks to the latest Finnish-made technology we get the samples reliably analysed within 20 minutes,” Giambruno reveals.

Besides successfully adapting and integrating global best COVID-19 practises, the Uruguay project has also benefited from the learnings of UPM’s Chinese operations.

“They were at the forefront of the first virus outbreak. They had first-hand knowledge how to manage the situation, so we naturally took all the things that worked well and implemented them for us.”

Alone in 2020, UPM hosted over 150 meetings with different stakeholders and more than 20 open sessions in communities sharing information, aligning expectations and telling how the project affects people’s daily lives.

“Like every large undertaking, the mill project has raised questions, but we welcome active interaction. Generally, the attitude has been supportive, positive and optimistic, especially now in time of global economy instability due the COVID-19,” Gonzalo Giambruno says.

Since this is UPM’s second mill project in Uruguay most of the people already know what to expect.

“It used to be difficult for locals to fathom what benefits a pulp value chain would bring to a country – or even what it is. Now people understand what kind of impact a pulp mill creates when its operations are tightly integrated within the surrounding communities. It brings prosperity and permanent employment opportunities.”

Giambruno describes the new mill a customer-focused project. Designed from the ground up to produce the right qualities and quantities of UPM Euca based on the present technical specification. The mill will also have the same high level of certification you have become accustomed to getting from the UPM Fray Bentos mill.

“Fray Bentos has been producing hardwood pulp reliably since 2007. We have almost 15 years of experience in pulp making in Uruguay when the Paso de los Toros mill starts up. And our customers will be able to take full advantage of that experience.”

The nursery is being built in Sarandi del Yì in the Durazno Department of central Uruguay. It will combine the best practices from UPM’s two existing nurseries and the company’s expertise in plantation-grown eucalyptus over the last 30 years.

The state-of-the-art nursery will be located in the heart of the region where UPM will increase their plantation areas to ensure raw material supply for the new mill. These plantations have been already providing wood for the Fray Bentos mill for years, but the new nursery will intensify the level and scale of activity in the area.