Can habitat restoration stop the loss of species?

Restoration provides essential information on the regeneration of ecosystems. The main objective of a joint project between UPM and WEPA Group is to determine the impact of restoration on biodiversity in a former peatland area.

A small, five-hectare peatland site within Harviala, Southern Finland, is a tiny but important part of a significant global challenge - how to combat the decline in biodiversity while at the same time, continue to be able to manage and utilise forests as part of a circular bioeconomy and that helps us to move beyond fossil-based materials.

This joint restoration project with WEPA Group on UPM’s Finnish forest estate, aims to re-establish the flora and fauna commonly found in a peatland habitat in an area that was previously drained to become more suited to forestry establishment. Such practices were common throughout Finland and in many other parts of the world in decades gone by. Peatlands, wetlands, bogs and swamps were often seen as unproductive undesirable wastelands of little value that were ripe for conversion to agricultural uses.

In addition to the threat of climate change, which in itself brings significant impacts to habitats and ecosystems, the loss of biodiversity and habitats is one of the major threats faced by humanity – mostly due to human activity. And despite biodiversity loss in most instances being linked to global forest clearances for agriculture, urbanisation, and infrastructure, it was the establishment of forests on non-forest land that caused the biodiversity impacts on many of Finland’s wetland areas, such as the one we are restoring in Harviala.

The complexity and consequences of biodiversity loss are not always easy to measure, and the wider impacts on an ecosystem from such loss can be greater than the sum of individual species going locally extinct.

Why does species loss matter?

Back in the 1980s, the ecologists Paul and Anne Ehrlich likened our understanding (or lack thereof) of when an ecosystem collapses to that of the construction of an airplane wing – where some individual rivets holding it together could be lost without significant issue, but where some are far more critical (in an ecosystem – ‘key species’), with their loss causing the whole wing to fall off ‘ecosystem collapse’ – but we are never quite sure of what the tipping point is.

We also often don’t know which aspects of our life will be affected by the loss of species. Will it be loss of clean balanced water cycles? Loss of potential future crop or medicinal species? Pests causing cascading effects that impact the viability of whole ecosystems or agricultural systems? It’s therefore crucial to obtain as much knowledge and experience as possible about species loss so that we can do everything we can to safeguard biodiversity well into the future.

To protect this biodiversity, we are looking for ways to maintain and increase it in and around our forests, and to protect the water and forest soil while continuing to manage forests in a productive way. For this joint project with WEPA Group, we are specifically looking at peatland restoration, with the aim of restoring habitat diversity as far as possible, beyond just the ‘typical’ forest habitats one might associate with our operations.

It is impossible to restore a forest (or any other ecosystem) to its absolute ‘original state’ because climate change and human activities have had so many irreversible or unknown effects – but also because it can be difficult to define what we mean by an ‘original state’ (pre-industrial development? pre-human presence? pre-Ice Age?...). Ecosystems are dynamic and ever-changing, but even with all these issues to contend with, we do know that improving biodiversity and reintroducing many species lost due to human activity is both possible and beneficial and can often be achieved within a relatively short period. 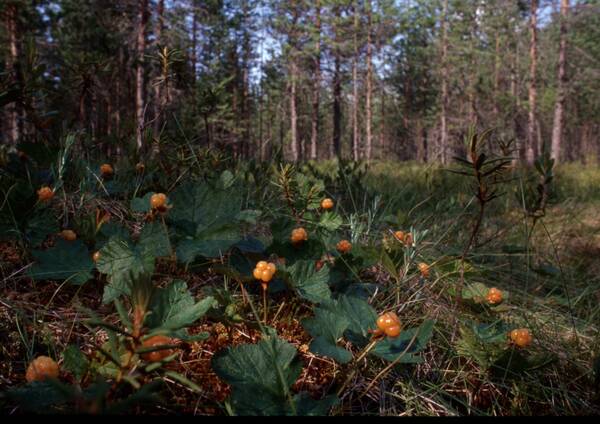 Cloudberry is a herbaceous perennial plant with wrinkled and kidney shaped leaves. Its white flowers bloom in June while its golden yellow berries ripen from July to August. Read more at https://www.upmforestlife.com/species/cloudberry

Restoration by raising the water level

The forest plot in Harviala was chosen because of its diverse area of peatland. The plot is a partially open bog that was drained around the 1970s. Old aerial photographs have allowed us to study what the area looked like before it was drained. The aim is to restore the forest to its pre-drainage tree and spatial composition.

During the summer, a species survey was carried out, focusing on moss and lichen species. The area is rich in biodiversity, but we are interested to see how this will evolve and change now that trees have been removed and the water levels of the peatland area have a chance to rise to more ‘typical’ levels.

The growing trees that were removed evaporate so much water that the water level cannot be raised without removing them. At the beginning of the year, the trees were removed from the project area and used to produce green energy. They were removed as whole trees in order to avoid a sudden influx of nutrients into the soil from cut branches.

UPM’s various forest management projects over the last few decades have already provided good insight into how forest biodiversity can be protected. The fundamental restoration work carried out in Harviala helps us to understand the dynamics of forest nature and the impact of human activities on biodiversity. We look forward to the coming years and the possibility to study the recovery of the area based on the restoration work that has already begun.