A History of Hygiene: 90 years of toilet paper at Hakle’s Toilet Paper Museum in Germany

The Hakle toilet paper museum in Dusseldorf showcases how toilet paper – and our preferences for it – have changed over the decades.

Hakle, a leading toilet paper brand in Germany, tasked employee Susanne Heckrath with a very unusual responsibility: to chronicle the entire history of the company’s products in Germany’s first and only toilet paper museum in Dusseldorf. The end result reflects the changing designs and preferences of the public.

Today it seems natural for us to use toilet paper every day. The Industry Association for Personal Care and Detergents states that the average German uses about 20,000 sheets of toilet paper annually. However, not so long ago, all the way into the 1950s and even 1960s, Germans used old pieces of newspaper.

In 2014, Hakle, one of the most famous and popular toilet paper brands in Germany, opened Germany’s first and only toilet paper museum in Dusseldorf to chronicle the entire history of their brand’s products. Now in its 90th year, Hakle is still a strong household name. There are over 400 exhibits, ordered and labeled at their brand archive, with toilet rolls dating back to the very beginning of the company.

“Germans fold the paper, Americans crumple the paper.” With a wink, Susanne Heckrath begins the tour. Lovingly displayed in a case is a roll from the very first production run in 1928. “This is the only one left,” says Heckrath reverently. The roll is brown and rough with one layer made out of old paper. However, most interesting and inventive is the silver seal glued on the roll: 1,000 sheets. Guaranteed! That was no small promise in 1928 when people normally used newspaper in lieu of toilet paper.

A photo of Hans Klenk rests beside the display case. Klenk was the first person to produce and sell toilet paper on a roll in Europe. He is Hakle‘s namesake – the company’s name is a shorthand of his full name.

Another exhibit on this historic shelf is a much whiter toilet paper roll from 1959 – Hakle’s first toilet paper made from cellulose pulp. Compared to the toilet papers before, this was stronger, softer and whiter. Fibres of two different lengths, woven together, made the paper more resistant and softer at the same time. Paper made from cellulose pulp is much easier to bleach, hence the nice, clean white colour. Heckrath notes that cellulose is also better for septic tanks.

Amazingly, the production process has not changed much since the beginning. Although nowadays production is much more efficient and effective because it is automated.

A luxury product until the late 60s

Heckrath’s work on the museum is historical and humorous. When she was assigned to archive the rolls and started to open all the boxes, she found many surprising products. For example, Hakle introduced the Duo-Roll in the 1960s. The roll actually contained two different rolls of paper of different texture. It came with a double dispenser. The package reads: “For the big and the small business.” The package also suggested that men should use the rougher paper while women should use the softer paper. 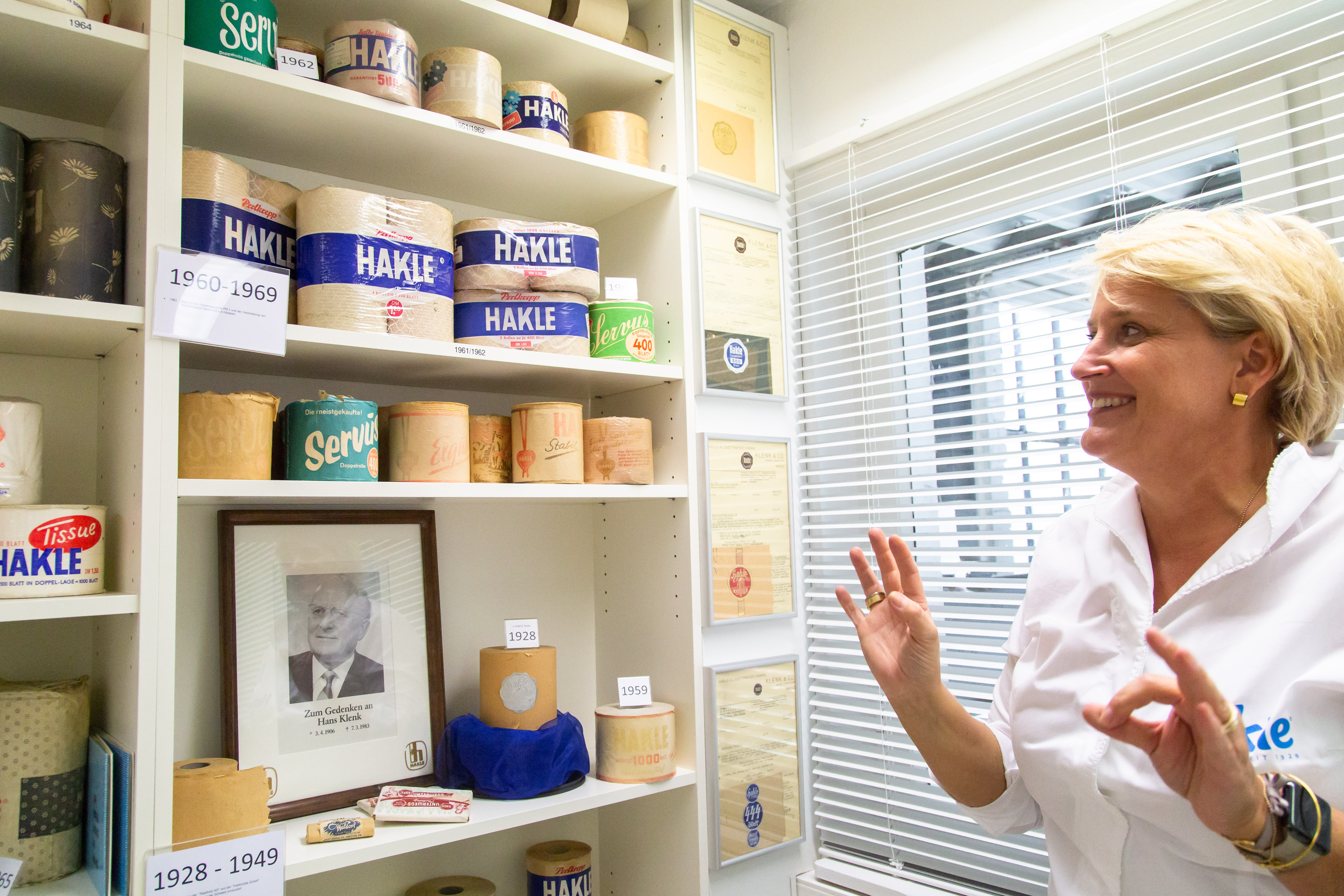 Until the late 60s toilet paper remained a luxury product. On some rolls in the museum prices are printed – for example a roll from 1965 cost 1.50 DM (Deutsche Mark, the old German currency), which was completely disproportionate to the average income at the time.

In the 70s colour was all the rage and Hakle invented Hakle Feucht, a semi-moist paper. In the 80s, the rolls were again simpler and scent was added to some editions for the first time. Hakle’s top product since 1995 has been Hakle Kamille, combining the print pattern and aroma of chamomile. Now Hakle makes special edition prints, like unicorns and flamingos.

Preferences also vary regionally. West Germans prefer white paper, while East Germans like violet paper according to Hakle’s sales’ reports. Germans love 3-layer paper, which was introduced in 1973. In 1982 the first 4-layer paper was produced, which is still on the market today and is sold as Hakle’s premium product, Hakle Lady. Americans and Chinese are fine with one, but not more than two layers.

“When we look into the future,” says Heckrath, “there is no alternative to toilet paper. We at Hakle are doing the same as we always have – improving the product. Of course, now with a stronger focus than ever on sustainability.”

One thing has stayed the same over the years: people need and want soft, absorbent, strong toilet paper. Our ancestors would be quite envious.